World Doula Week Challenge. Day 3. or who I love working with.

I guess this challenge turned out to be a real challenge to me. With constant flow of changes around two kids I barely keep up with not enough sleep. So here is my last post for the World Doula Week.

Day 3. Post a photo of yourself with a doctor or midwife with whom you have built a bridge. 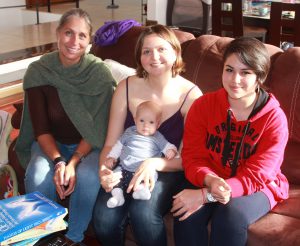 On this photo I am with a midwife Hannah Freiwald and her daughter Diana, who happened to be also her mother’s assistant at work. Since I met Hannah in 2013 I am convinced she is a great choice for maternity care for someone who wants to have the most natural and respected birth. She is also a great choice for expats who do not speak Spanish. Both Hannah and Diana are perfectly fluent in 3 languages: English, Spanish and German.

I used Hannah’s services during both of my pregnancies and births of my own two children. I like how she adjusts her work according to desires and individuality of her clients. I also love how organized she is and some kind of motherly warmth it seems she surrounds every woman with. Since we share similar views on many aspects of life and both are passionate about helping women to achieve their dream births, over time we became friends. Once I decided to become a doula, she recommended me to her clients. With her clients I have had practice required for my certification. To work with her in a team is a pleasure!

Hannah is one of very few medical professionals in Guatemala with whom one can have a VBAC (Vaginal Birth after C-section). In Guatemala c-section rate is very high: it is just a bit above 42% for the country in average, but it escalates up to 94% in private hospitals! With the World Health Organisation suggesting that the highest acceptable limit for national cesarean section rates should not be more than 15% (this figure was based on the cesarean section rates of some countries with the lowest perinatal mortality in the world), it is obvious that there is something wrong with the picture. Despite that cesarean sections increase the health risks for mothers and babies as well as the costs of health care compared with normal deliveries, the epidemic of cesarean section in this country continues also partly because cesarean section has become culturally accepted as a normal way of giving birth. In a general conversation with women in Guatemala I’m often asked if I gave birth naturally or via a c-section, implying that the last is not rare at all. And that is the truth: here I met more women who had cesarean births than vaginal births. As well it is quite frequent that those who had a c-section at least once, had their following kids born via c-sections as well, being led to believe by their doctors that was the safest option possible. Not many are even aware about possibility to have a normal birth after a c-section, as very small percent of doctors in Guatemala is up to attend this type of birth. Hannah not just supports women who desire to have a VBAC but also provides support to the victims of medically unnecessary c-sections. 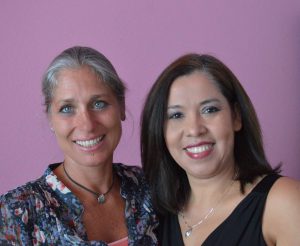 Last year Hannah Freiwald together with doctor Linda Valencia (on the photo on the right) opened a clinic Centro Integral de Parto Natural Ixchel. According to my best knowledge, it is the only clinic in Guatemala that combines professional midwifery with modern obstetrics and gynecology providing women an opportunity to have the best possible birth experience according to their individual health care needs, preferences and values. I have not worked with Linda Valencia yet, but we have agreed about this possibility. What I like about her is that just like Hannah she is a women rights activist, who often gives public speeches educating people about unfortunately common obstetrical violence in birth, and strives to help women to have birth experience they desire. What truly surprised me in a good way is that doctor Linda is even willing to support a lotus birth (not cutting the cord) in case of a c-section as long as the hospital where she operates permits her, and for sure if the operation is performed at her clinic. For many doctors it is still something way out of their comfort zone.

One beautiful thing about legislation in Guatemala is that one can give birth in any hospital with their own team of doctors, anesthesiologists, neonatologists etc. As well as one can legally invite their midwife or doctor to attend a home birth. So, one doesn’t have to choose between a doctor of preference and a place of preference: you can have both in any combination you desire. The most important in this case remains to choose health care providers who treat you and every aspect of the birth of your child with respect.